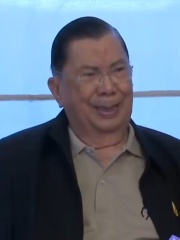 Chavalit Yongchaiyudh (Thai: ชวลิต ยงใจยุทธ, RTGS: Chawalit Yongchaiyut, IPA: [t͡ɕʰá.wá.lít joŋ.t͡ɕaj.jút]; born 15 May 1932), also known as "Big Jiew" (บิ๊กจิ๋ว, RTGS: Bik Chio, IPA: [bík t͡ɕǐw]), is a Thai politician and retired army officer. From 1986 to 1990 he was the Commander-in-chief of the Royal Thai Army (RTA), and Supreme Commander of the Royal Thai Armed Forces from 1987 to 1990. In 1990 he founded the New Aspiration Party which he led until 2002. Read more on Wikipedia

Since 2007, the English Wikipedia page of Chavalit Yongchaiyudh has received more than 73,228 page views. His biography is available in 16 different languages on Wikipedia making him the 10,792nd most popular politician.