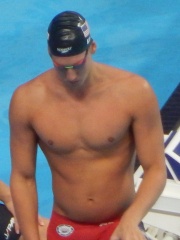 Chase Tyler Kalisz (born March 7, 1994) is an American competition swimmer who specializes in the individual medley, but also competes in the breaststroke and butterfly events. At the 2013 World Aquatics Championships in Barcelona, Kalisz won silver in the 400-meter individual medley, finishing with a time of 4:09.22, which was half a second behind gold medal winner Daiya Seto of Japan. Kalisz attends the University of Georgia, where he competed for the Georgia Bulldogs swimming and diving team. Read more on Wikipedia

Since 2007, the English Wikipedia page of Chase Kalisz has received more than 145,788 page views. Her biography is available in 15 different languages on Wikipedia making her the 253rd most popular swimmer.