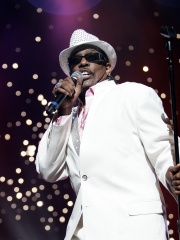 Charles Kent Wilson (born January 29, 1953), also known as Uncle Charlie, is an American singer, songwriter, record producer and the former lead vocalist of the Gap Band. As a solo artist Wilson's been nominated for thirteen Grammy awards and eleven NAACP Image Awards (including two wins), received a 2009 Soul Train Icon Award, and was a recipient of a BMI Icon Award in 2005. In 2009 and 2020, he was named Billboard magazine's No. Read more on Wikipedia

Among singers, Charlie Wilson ranks 2,350 out of 3,541. Before her are Jain, Mýa, Shin Ji-min, Alex Band, Joey McIntyre, and Doja Cat. After her are Fabri Fibra, Alyosha, Mohsen Namjoo, Benny Cristo, Juicy J, and Chenoa.