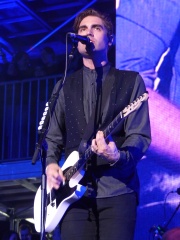 Charles Robert Simpson (born 7 June 1985) is an English singer, songwriter and musician. He is the youngest member of multi-BRIT Award-winning band Busted and he is also the lead vocalist and the rhythm guitarist in the British post-hardcore band Fightstar. AllMusic has noted that Simpson is "perhaps the only pop star to make the convincing transition from fresh-faced boy bander to authentic hard rock frontman". Read more on Wikipedia

Among musicians, Charlie Simpson ranks 2,668 out of 2,675. Before him are Harry Judd, Crystal Bowersox, Bo Bice, Liam Finn, Asher Monroe, and Lee DeWyze. After him are Missy Higgins, Amit Trivedi, MNEK, Rusko, and Ted Curson.