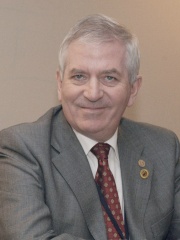 Charles McCreevy (born 30 September 1949) is a former Irish Fianna Fáil politician who served as European Commissioner for Internal Market and Services from 2004 to 2010, Minister for Finance from 1997 to 2004, Minister for Tourism and Trade from 1993 to 1994 and Minister for Social Welfare from 1992 to 1993. He served as a Teachta Dála (TD) for the Kildare constituency (and later the Kildare North constituency) from 1977 to 2004.When McCreevy resigned his Dáil seat on his appointment to the European Commission, his son, Charlie Jr., declined the opportunity to be the Fianna Fáil candidate in the resulting by-election. Read more on Wikipedia

Among people born in 1949, Charlie McCreevy ranks 610. Before him are Tom Corbett, Martin Buchan, Terrence W. Wilcutt, Pat Fraley, Joe Royle, and Mo Mowlam. After him are Sammy Nelson and Ilene Graff.