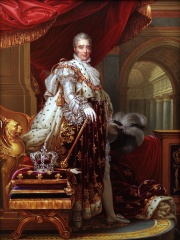 Charles X (born Charles Philippe, Count of Artois; 9 October 1757 – 6 November 1836) was King of France from 16 September 1824 until 2 August 1830. An uncle of the uncrowned Louis XVII and younger brother to reigning kings Louis XVI and Louis XVIII, he supported the latter in exile. After the Bourbon Restoration in 1814, Charles (as heir-presumptive) became the leader of the ultra-royalists, a radical monarchist faction within the French court that affirmed rule by divine right and opposed the concessions towards liberals and guarantees of civil liberties granted by the Charter of 1814. Read more on Wikipedia

Charles X of France is most famous for being the king of France from 1824 to 1830, and for being overthrown in the July Revolution.

Page views of Charles X of Frances by language

Among politicians, Charles X of France ranks 208 out of 15,710. Before him are Odoacer, Slobodan Milošević, Henry VII of England, Catherine I of Russia, Rudolf Hess, and Akbar. After him are Napoleon II, Emperor Meiji, William the Silent, Empress Dowager Cixi, James VI and I, and Scipio Africanus.