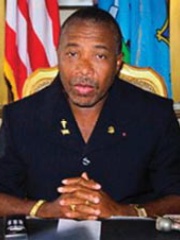 Charles McArthur Ghankay Taylor (born 28 January 1948) is a former Liberian politician and convicted war criminal who served as the 22nd President of Liberia from 2 August 1997 until his resignation on 11 August 2003, as a result of the Second Liberian Civil War and growing international pressure.Born in Arthington, Montserrado County, Liberia, Taylor earned a degree at Bentley College in the United States before returning to Liberia to work in the government of Samuel Doe. After being removed for embezzlement, he eventually arrived in Libya, where he was trained as a guerrilla fighter. He returned to Liberia in 1989 as the head of a Libyan-backed rebel group, the National Patriotic Front of Liberia, to overthrow the Doe government, initiating the First Liberian Civil War (1989–1996). Read more on Wikipedia

Among POLITICIANS In Liberia