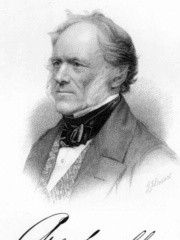 Sir Charles Lyell, 1st Baronet, (14 November 1797 – 22 February 1875) was a Scottish geologist who demonstrated the power of known natural causes in explaining Earth's history. He is best known as the author of Principles of Geology (1830–33), which presented to a wide public audience the idea that Earth was shaped by the same natural processes still in operation today, operating at similar intensities. The philosopher William Whewell termed this gradualistic view "uniformitarianism" and contrasted it with catastrophism, which had been championed by Georges Cuvier and was better accepted in Europe. Read more on Wikipedia

Since 2007, the English Wikipedia page of Charles Lyell has received more than 692,891 page views. His biography is available in 49 different languages on Wikipedia making him the 6th most popular geologist.

Among GEOLOGISTS In United Kingdom