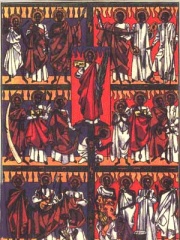 Charles Lwanga (Luganda: Kaloli Lwanga (1 January 1860 – 3 June 1886) was a Ugandan convert to the Catholic Church, who was martyred for his faith and is revered as a saint by both the Catholic Church and the Anglican Communion.A member of the Baganda tribe, Lwanga was born in the Kingdom of Buganda, the central and southern part of modern Uganda, and served as chief of the royal pages and later major-domo in the court of King Mwanga II of Buganda. Read more on Wikipedia

Since 2007, the English Wikipedia page of Charles Lwanga has received more than 122,905 page views. His biography is available in 16 different languages on Wikipedia making him the 1,430th most popular religious figure.