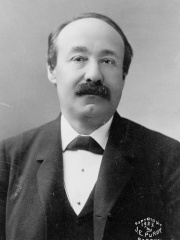 Charles Joseph Bonaparte (; June 9, 1851 – June 28, 1921) was an American lawyer and political activist for progressive and liberal causes. Originally from Baltimore, Maryland, he served in the cabinet of the 26th U.S. president, Theodore Roosevelt. Bonaparte was the U.S. Secretary of the Navy and later the U.S. Attorney General. During his tenure as the attorney general, he created the Bureau of Investigation which later grew and expanded by the 1920s under the director J. Read more on Wikipedia

Among politicians, Charles Joseph Bonaparte ranks 9,034 out of 15,577. Before him are Johan Ferrier, Pausanias of Macedon, Huai of Xia, Alexander Novikov, Artur London, and Ignaz von Born. After him are Gheorghe Tătărescu, Seán MacBride, Carlos Westendorp, Wilhelm von Mirbach, Arturo Umberto Illia, and Gertrude of Süpplingenburg.