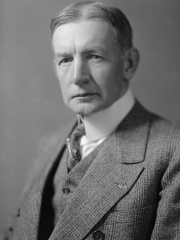 Charles Gates Dawes (August 27, 1865 – April 23, 1951) was an American banker, general, diplomat, composer, and Republican politician who was the 30th vice president of the United States from 1925 to 1929. For his work on the Dawes Plan for World War I reparations, he was a co-recipient of the Nobel Peace Prize in 1925. Born in Marietta, Ohio, Dawes attended Cincinnati Law School before beginning a legal career in Lincoln, Nebraska. Read more on Wikipedia

Since 2007, the English Wikipedia page of Charles G. Dawes has received more than 474,345 page views. His biography is available in 58 different languages on Wikipedia making him the 4,458th most popular politician.

Among politicians, Charles G. Dawes ranks 4,432 out of 14,801. Before him are Nizam-ul-Mulk, Asaf Jah I, Authari, Tāufaʻāhau Tupou IV, Aistulf, Emperor Go-Uda, and Duke Huan of Qi. After him are Simon Thassi, Muhammad bin Tughluq, Emperor Kameyama, Najm ad-Din Ayyub, Galswintha, and Osroes I.