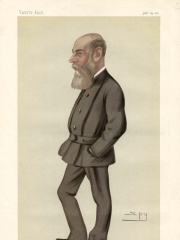 Charles Cunningham Boycott (12 March 1832 – 19 June 1897) was an English land agent whose ostracism by his local community in Ireland gave the English language the verb "to boycott". He had served in the British Army 39th Foot, which brought him to Ireland. After retiring from the army, Boycott worked as a land agent for Lord Erne, a landowner in the Lough Mask area of County Mayo.In 1880, as part of its campaign for the Three Fs (fair rent, fixity of tenure, and free sale) and specifically in resistance to proposed evictions on the estate, local activists of the Irish National Land League encouraged Boycott's employees (including the seasonal workers required to harvest the crops on Lord Erne's estate) to withdraw their labour, and began a campaign of isolation against Boycott in the local community. Read more on Wikipedia