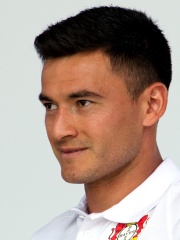 Charles Mariano Aránguiz Sandoval (Spanish pronunciation: [ˈtʃaɾles aˈɾaŋɡis]; born 17 April 1989) is a Chilean professional footballer who plays as a midfielder for German club Bayer Leverkusen and the Chile national team. With his former club Universidad de Chile, Aránguiz was considered one of the best midfielders in the Chilean Primera División, with a good sense of tactics, impressive stamina and intelligent playmaking, marking and passing abilities. He can play as a defensive, center or even as a right wing midfielder. Read more on Wikipedia

Since 2007, the English Wikipedia page of Charles Aránguiz has received more than 457,171 page views. His biography is available in 35 different languages on Wikipedia making him the 3,612th most popular soccer player.