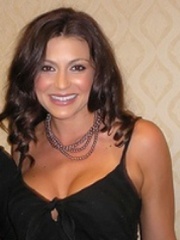 Cerina Vincent (born February 7, 1979) is an American actress and writer. She had her breakthrough role starring as Maya in the television series Power Rangers Lost Galaxy, followed by a part in the comedy film Not Another Teen Movie, before going on to star in the horror film Cabin Fever, which established her as a "scream queen" and led to further roles in horror movies. More recently, she appeared as Suzy Diaz in the Disney Channel series Stuck in the Middle. Read more on Wikipedia

Among actors, Cerina Vincent ranks 9,038 out of 10,030. Before her are Julia Sawalha, Laura Bell Bundy, Hoya, Çağla Kubat, Rati Agnihotri, and Todd Lowe. After her are Rina Ikoma, Eve Hewson, Nadia Bjorlin, Will Tudor, Dana Davis, and Josh Helman.