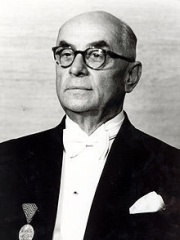 Mahmut Celâl Bayar (16 May 1883 – 22 August 1986) was a Turkish politician who was the third President of Turkey from 1950 to 1960; previously he was Prime Minister of Turkey from 1937 to 1939. Bayar, as the Turkish President, was decorated with the Legion of Merit by the President of the United States, as a result of Turkey's participation in the Korean War. He is considered to be the longest-lived former head of state and was the longest-lived state leader until 8 December 2008 (when he was surpassed by Chau Sen Cocsal Chhum). Read more on Wikipedia

Celâl Bayar is most famous for being the first president of the Turkish Republic. He was also a member of the Republican People's Party, which was the dominant party in Turkey from 1923 to 1950.

Among politicians, Celâl Bayar ranks 1,707 out of 15,710. Before him are Albert the Bear, Catherine Jagiellon, Glycerius, James Hepburn, 4th Earl of Bothwell, Faustina the Younger, and Hoshea. After him are Chilperic II, Rudolf IV, Duke of Austria, Attalus I, Theuderic I, Horik I, and Bernhard von Bülow.