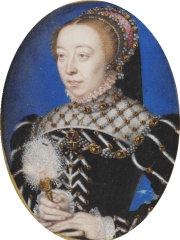 Catherine de' Medici (Italian: Caterina de' Medici, pronounced [kateˈriːna de ˈmɛːditʃi]; French: Catherine de Médicis, pronounced [katʁin də medisis]; 13 April 1519 – 5 January 1589) was a Florentine noblewoman born into the Medici family. She was Queen of France from 1547 to 1559 by marriage to King Henry II and the mother of French Kings Francis II, Charles IX, and Henry III. The years during which her sons reigned have been called "the age of Catherine de' Medici" since she had extensive, if at times varying, influence in the political life of France.Catherine was born in Florence to Lorenzo de' Medici, Duke of Urbino, and Madeleine de La Tour d'Auvergne. In 1533, at the age of 14, Catherine married Henry, the second son of King Francis I and Queen Claude of France, who would become Dauphin of France upon the death of his elder brother Francis in 1536. Catherine's marriage was arranged by her uncle Pope Clement VII. Read more on Wikipedia

Catherine de' Medici was a powerful Italian noblewoman who became queen consort of France in 1547 by marrying King Henry II. She was the mother of three kings of France, including Francis II, Charles IX, and Henry III. Catherine was also the last direct descendent of Lorenzo de' Medici, the ruler of Florence.

Among companions, Catherine de' Medici ranks 6 out of 673. Before her are Nefertiti, Empress Elisabeth of Austria, Anne Boleyn, Catherine of Aragon, and Fatimah. After her are Aisha, Mihrimah Sultan, Nurbanu Sultan, Eva Braun, Helena, and Khadija bint Khuwaylid.