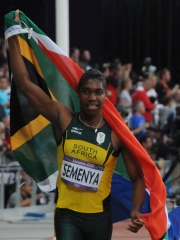 Mokgadi Caster Semenya OIB (born 7 January 1991) is a South African middle-distance runner and 2016 Olympic gold medalist. She won gold in the women's 800 metres at the 2009 World Championships with a time of 1:55.45, the 2016 Summer Olympics, and the 2017 World Championships in her new personal best, 1:55.16. After the doping disqualification of Mariya Savinova, she also was awarded gold medals at the 2011 World Championships and the 2012 Summer Olympics, all in the 800 metres.Semenya is an intersex cisgender woman, assigned female at birth, with XY chromosomes and naturally elevated testosterone levels due to 5α-Reductase deficiency. Read more on Wikipedia

Since 2007, the English Wikipedia page of Caster Semenya has received more than 5,373,549 page views. Her biography is available in 34 different languages on Wikipedia making her the 629th most popular athlete.

Among ATHLETES In South Africa