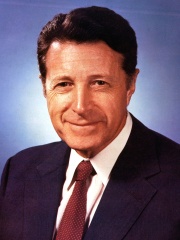 Caspar Willard "Cap" Weinberger GBE (August 18, 1917 – March 28, 2006) was an American politician and businessman. As a prominent Republican, he served in a variety of state and federal positions for three decades, including Chairman of the California Republican Party, 1962–68. Most notably he was Secretary of Defense under President Ronald Reagan from 1981 to 1987.Weinberger was born in San Francisco, California. He served in the 41st Infantry Division in the Pacific theater of World War II. Read more on Wikipedia

Since 2007, the English Wikipedia page of Caspar Weinberger has received more than 717,187 page views. His biography is available in 24 different languages on Wikipedia making him the 10,184th most popular politician.

Among politicians, Caspar Weinberger ranks 10,129 out of 14,801. Before him are José María Guido, Sadeq Khan Zand, Karl, Duke of Schleswig-Holstein-Sonderburg-Glücksburg, Ahti Karjalainen, Lucius Aemilius Lepidus Paullus, and Gisulf II of Friuli. After him are Edward Hyde, 1st Earl of Clarendon, Roger Williams, Jamshid bin Abdullah of Zanzibar, Şemsettin Günaltay, Tribhuvan of Nepal, and Pacorus I.