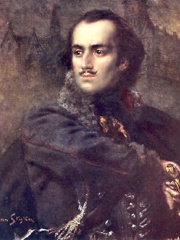 Kazimierz Michał Władysław Wiktor Pułaski of Ślepowron (Polish pronunciation: [kaˈʑimjɛʐ puˈwaskʲi] (listen); Casimir Pulaski ; March 4 or March 6, 1745 – October 11, 1779) was a Polish nobleman, soldier and military commander who has been called, together with his counterpart Michael Kovats de Fabriczy, "the father of the American cavalry." Born in Warsaw and following in his father's footsteps, he became interested in politics at an early age. He soon became involved in the military and in revolutionary affairs in the Polish–Lithuanian Commonwealth. Pulaski was one of the leading military commanders for the Bar Confederation and fought against the Commonwealth's foreign domination. Read more on Wikipedia

Among military personnels, Casimir Pulaski ranks 544 out of 1,466. Before him are Jean-Charles Pichegru, Gaston of Foix, Duke of Nemours, Kirill Moskalenko, Pavel Nakhimov, Jean-Mathieu-Philibert Sérurier, and Callimachus. After him are Creighton Abrams, Ugo Cavallero, Fyodor Ushakov, Oswald Boelcke, Ivan Yakubovsky, and Grigory Kulik.