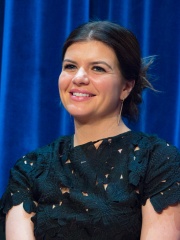 Cathryn Rose "Casey" Wilson (born October 24, 1980) is an American actress, comedienne, and screenwriter. She starred as Penny Hartz in the ABC comedy series Happy Endings for which she was twice nominated to the Critics' Choice Television Award for Best Supporting Actress in a Comedy Series, and has since starred in comedies such as Showtime's Black Monday, Apple TV's The Shrink Next Door, Hulu's The Hotwives and Marry Me on NBC. Other notable work includes supporting roles in films such as Gone Girl, Julie & Julia, and The Meddler, recurring in the HBO series Mrs. Fletcher, the Amazon comedy One Mississippi, and the Netflix series Atypical, and her 2013 Sundance film Ass Backwards, which she co-wrote and starred in with her creative partner June Diane Raphael. Read more on Wikipedia