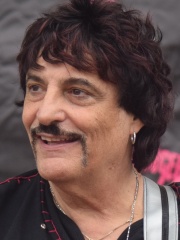 Carmine Appice ( ) (born December 15, 1946) is an American drummer and percussionist most commonly associated with the rock genre of music. He has received classical music training, and was influenced early-on by the work of jazz drummers Buddy Rich and Gene Krupa. He is best known for his associations with Vanilla Fudge; Cactus; the power trio Beck, Bogert & Appice; Rod Stewart; King Kobra; and Blue Murder, which also featured John Sykes, of Whitesnake and Thin Lizzy fame, and Tony Franklin of The Firm. Read more on Wikipedia

Since 2007, the English Wikipedia page of Carmine Appice has received more than 808,507 page views. His biography is available in 20 different languages on Wikipedia making him the 965th most popular musician.

Among musicians, Carmine Appice ranks 968 out of 2,258. Before him are Berry Gordy, Blackie Lawless, Shavo Odadjian, David Sanborn, Prince Buster, and Seasick Steve. After him are Tyler, the Creator, Gary Peacock, Vinnie Colaiuta, Pixinguinha, Clark Terry, and Michael Weikath.