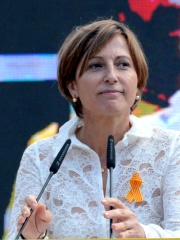 Maria Carme Forcadell i Lluís (born 29 May 1955) is a Spanish politician from Catalonia. She is the former President of the Parliament of Catalonia, as well as a Catalan high school teacher, known for her Catalan independence activism. She was one of the founders of Plataforma per la Llengua, a member of the executive board of the Sabadell branch of Òmnium Cultural, and president of the Catalan National Assembly from its inception until May 2015.In 2015, she won a seat in the Catalan parliament as part of the Junts pel Sí coalition. Read more on Wikipedia

Carmen is most famous for her opera "Carmen" which is based on the story of a Spanish gypsy girl who falls in love with a soldier.

Among politicians, Carme Forcadell ranks 3,540 out of 15,710. Before her are Milan Rastislav Štefánik, Shigeru Yoshida, Urraca of Castile, Queen of Portugal, Boris II of Bulgaria, Mohammad-Ali Rajai, and Amenemhat II. After her are Nobusuke Kishi, Teos of Egypt, Maharana Pratap, Seth-Peribsen, Artur Rasizade, and Shalmaneser V.