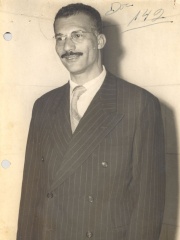 Carlos Marighella (Brazilian Portuguese: [ˈkaʁluz ˌmaɾiˈɡɛlɐ]; 5 December 1911 – 4 November 1969) was a Brazilian politician, writer and guerrilla fighter of Marxist–Leninist orientation, accused of engaging in "terrorist acts" against the Brazilian Military Dictatorship.Marighella's most famous contribution to revolutionary struggle literature was the Minimanual of the Urban Guerrilla, consisting of advice on how to disrupt and overthrow a military regime, aiming at revolution to implement a Marxist regime. Written shortly before his death in late 1969 in São Paulo, Minimanual was first published in North America by the Berkeley Tribe in Berkeley, California in July 1970 in an English edition. Marighella also wrote For the Liberation of Brazil. Read more on Wikipedia

Since 2007, the English Wikipedia page of Carlos Marighella has received more than 137,573 page views. His biography is available in 17 different languages on Wikipedia making him the 2,005th most popular writer.

Among WRITERS In Brazil