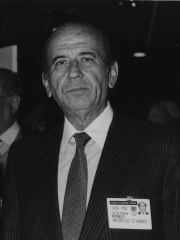 Carlos Andrés Pérez Rodríguez (27 October 1922 – 25 December 2010) also known as CAP and often referred to as El Gocho (due to his Andean origins), was a Venezuelan politician, President of Venezuela from 12 March 1974 to 12 March 1979 and again from 2 February 1989 to 21 May 1993. His first presidency was known as the Saudi Venezuela due to its economic and social prosperity thanks to enormous income from petroleum exportation. However, his second period saw a continuation of the economic crisis of the 1980s, and saw a series of social crises, a popular revolt (denominated Caracazo) and two coup attempts in 1992. Read more on Wikipedia

Since 2007, the English Wikipedia page of Carlos Andrés Pérez has received more than 280,403 page views. His biography is available in 35 different languages on Wikipedia making him the 3,447th most popular politician.

Among politicians, Carlos Andrés Pérez ranks 3,425 out of 14,801. Before him are Gelon, Grimoald the Elder, Emomali Rahmon, Grand Duchess Anastasia Mikhailovna of Russia, Georgy Chicherin, and Michel Aflaq. After him are Olave Baden-Powell, Johann I Joseph, Prince of Liechtenstein, Louis I, Duke of Bavaria, George Papandreou, Kusunoki Masashige, and Vojtech Tuka.