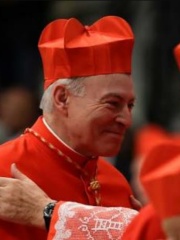 Carlos Aguiar Retes (Spanish pronunciation: [ˈkaɾlos aˈɣjaɾ ˈretes]; born 9 January 1950) is a Mexican cardinal of the Roman Catholic Church who serves as the Archbishop of Mexico City. He has served as an officer of the Mexican Episcopal Conference and the Latin American Episcopal Conference (CELAM) and been president of both. He helped draft the landmark mission statement CELAM issued at the close of its 2007 conference in Aparecida. Read more on Wikipedia

Among religious figures, Carlos Aguiar Retes ranks 2,101 out of 2,272. Before him are Leo Makkonen, Paulinus of York, Tychicus, Stigand, Ravi Shankar, and Chiara Badano. After him are Pope Peter II of Alexandria, Filoimea Telito, Telesphore Toppo, Bruce M. Metzger, J. I. Packer, and Pope Kedron of Alexandria.

Among RELIGIOUS FIGURES In Mexico