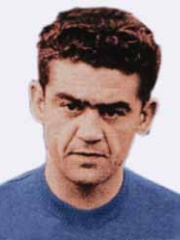 Carlo Annovazzi (Italian pronunciation: [ˈkarlo annoˈvattsi]; 24 May 1925 – 10 October 1980) was an Italian footballer who played as a midfielder. He was usually deployed as a right-sided, central, or defensive midfielder, although he was also capable of playing in defence. A large and physically imposing player, despite his deeper playing role, he was known for his eye for goal as a footballer, and was also an accurate penalty kick taker; during his time with A.C. Read more on Wikipedia

Since 2007, the English Wikipedia page of Carlo Annovazzi has received more than 14,404 page views. His biography is available in 15 different languages on Wikipedia making him the 2,076th most popular soccer player.