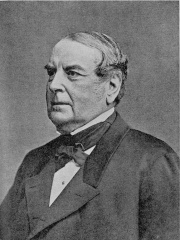 Carl Johan Thyselius (8 June 1811 – 11 January 1891) was a politician, state official (Swedish: ämbetsman), Justice Councillor (Swedish: justitieråd) 1856-60, "Minister for Ecclesiastical Affairs" (comparable to Minister of Education, Swedish: ecklesiastikminister) 1860-63, Minister for Civil Affairs (responsible for trade, industry and ship transport; Swedish: civilminister) 1875-80, and served as Prime Minister from 1883 to 1884.At the age of 72 years and 5 days, Thyselius is the oldest person to become Prime Minister in Swedish history. Read more on Wikipedia

Since 2007, the English Wikipedia page of Carl Johan Thyselius has received more than 11,896 page views. His biography is available in 22 different languages on Wikipedia making him the 9,099th most popular politician.

Among politicians, Carl Johan Thyselius ranks 9,063 out of 14,801. Before him are Thoros I, Prince of Armenia, Adelaide-Blanche of Anjou, Sonni Ali, Ashur-resh-ishi I, Jaan Poska, and Bo Yibo. After him are Eberhard I, Duke of Württemberg, Suleiman Frangieh, Kamehameha III, Dioncounda Traoré, Farabundo Martí, and George Robinson, 1st Marquess of Ripon.