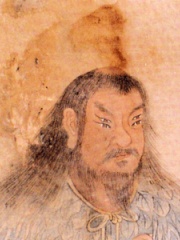 Cāngjié (simplified Chinese: 仓颉; traditional Chinese: 倉頡) is a legendary figure in ancient China (c. 2667 BCE – 2596 BCE), claimed to be an official historian of the Yellow Emperor and the inventor of Chinese characters. Legend has it that he had four eyes, and that when he invented the characters, the deities and ghosts cried and the sky rained millet. Read more on Wikipedia

Since 2007, the English Wikipedia page of Cangjie has received more than 175,234 page views. His biography is available in 23 different languages on Wikipedia. Cangjie is the 5,645th most popular politician (down from 4,515th in 2019), the 429th most popular biography from China (down from 363rd in 2019) and the 258th most popular Politician.

Page views of Cangjies by language

Among politicians, Cangjie ranks 5,645 out of 15,577. Before him are Heo Jeong, Frederick II, Margrave of Meissen, Pushyamitra Shunga, Rechila, García Íñiguez of Pamplona, and Sinon. After him are Ranavalona II, Henri d'Orléans, Duke of Aumale, Vilma Espín, Wolf-Heinrich Graf von Helldorff, Al-Mughira, and Abdelaziz of Morocco.

Among people born in 2650 BC, Cangjie ranks 3. Before him are Huni and Enmebaragesi.