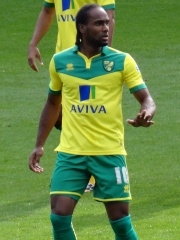 Cameron Zishan Rana-Jerome (born 14 August 1986), known as Cameron Jerome, is an English professional footballer who most recently played as a striker for Turkish Süper Lig club Göztepe. He earned 10 caps for the England under-21 team. Jerome began his career as a trainee with Huddersfield Town, Grimsby Town, Sheffield Wednesday and Middlesbrough before signing a professional contract with Cardiff City in the summer of 2004. Read more on Wikipedia

Since 2007, the English Wikipedia page of Cameron Jerome has received more than 492,145 page views. His biography is available in 25 different languages on Wikipedia making him the 11,037th most popular soccer player.