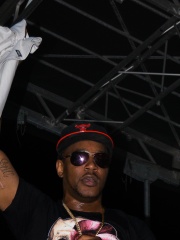 Cameron Ezike Giles (born February 4, 1976), better known by his stage name Cam'ron, is an American rapper, record executive, and actor from Harlem, New York City. Beginning his career in the mid-1990s as Killa Cam, Giles signed to Lance "Un" Rivera's Untertainment under the aegis of Epic and released his first two studio albums Confessions of Fire and S.D.E. (Sports Drugs & Entertainment) in 1998 and 2000 respectively; the former achieved gold status by the RIAA. After leaving Epic, Giles signed to Roc-A-Fella Records in 2001 and released his third studio album Come Home with Me the following year; it achieved platinum status by the RIAA, and also contained Cam'ron's highest-charting singles to date; "Oh Boy" and "Hey Ma", which peaked at No. 4 and No. Read more on Wikipedia

Page views of Cam'rons by language