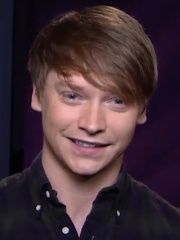 Calum Worthy (born January 28, 1991) is a Canadian actor, writer, and producer, known for his roles as Dez on the Disney Channel series Austin & Ally, Alex Trimboli in the Netflix series American Vandal, Nicholas Godejohn in the Hulu series The Act, and himself in The Coppertop Flop Show. He has won two Young Artist Awards in the Leading Young Actor category for his performances in the comedy film National Lampoon's Thanksgiving Family Reunion (2003) and the science fiction television series Stormworld (2009). He also won the Leading Actor award at the 2010 Leo Awards for his performance in Stormworld. Worthy has guest-starred in numerous television series, including ABC Family's Kyle XY, The CW's Supernatural and Smallville, CTV's Flashpoint, The Hub's R. L. Read more on Wikipedia

Since 2007, the English Wikipedia page of Calum Worthy has received more than 1,227,434 page views. His biography is available in 21 different languages on Wikipedia making him the 8,452nd most popular actor.