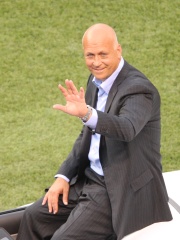 Calvin Edwin Ripken Jr. (born August 24, 1960), nicknamed "The Iron Man", is an American former baseball shortstop and third baseman who played 21 seasons in Major League Baseball (MLB) for the Baltimore Orioles (1981–2001). One of his position's most offensively productive players, Ripken compiled 3,184 hits, 431 home runs, and 1,695 runs batted in during his career, and he won two Gold Glove Awards for his defense. Read more on Wikipedia

Since 2007, the English Wikipedia page of Cal Ripken Jr. has received more than 1,555,061 page views. His biography is available in 17 different languages on Wikipedia making him the 30th most popular baseball player.