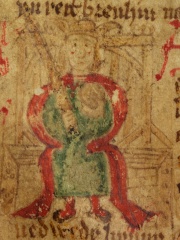 Cadwallon ap Cadfan (died 634) was the King of Gwynedd from around 625 until his death in battle. The son and successor of Cadfan ap Iago, he is best remembered as the King of the Britons who invaded and conquered the Kingdom of Northumbria, defeating and killing its king, Edwin, prior to his own death in battle against Oswald of Bernicia. His conquest of Northumbria, which he held for a year or two after Edwin died, made him the last Briton to hold substantial territory in eastern Britain until the rise of the House of Tudor. Read more on Wikipedia

Since 2007, the English Wikipedia page of Cadwallon ap Cadfan has received more than 83,545 page views. His biography is available in 15 different languages on Wikipedia making him the 11,811th most popular politician.