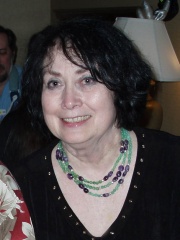 Carolyn Janice Cherry (born September 1, 1942), better known by the pen name C. J. Cherryh, is an American writer of speculative fiction. She has written more than 80 books since the mid-1970s, including the Hugo Award-winning novels Downbelow Station (1981) and Cyteen (1988), both set in her Alliance–Union universe. She is known for "world building", depicting fictional realms with great realism supported by vast research in history, language, psychology, and archeology. Cherryh (pronounced "Cherry") appended a silent "h" to her real name because her first editor, Donald A. Read more on Wikipedia

Since 2007, the English Wikipedia page of C. J. Cherryh has received more than 271,863 page views. Her biography is available in 28 different languages on Wikipedia making her the 3,682nd most popular writer.