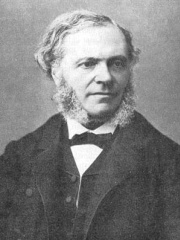 César-Auguste-Jean-Guillaume-Hubert Franck (10 December 1822 – 8 November 1890) was a composer, pianist, organist, and music teacher who worked in Paris during his adult life. He was born at Liège, in what is now Belgium (though at the time of his birth it was part of the United Kingdom of the Netherlands). He gave his first concerts there in 1834 and studied privately in Paris from 1835, where his teachers included Anton Reicha. Read more on Wikipedia

Since 2007, the English Wikipedia page of César Franck has received more than 454,234 page views. His biography is available in 49 different languages on Wikipedia making him the 80th most popular composer.

Among people born in 1822, César Franck ranks 5. Before him are Louis Pasteur, Gregor Mendel, Heinrich Schliemann, and Ulysses S. Grant. After him are Frédéric Passy, Francis Galton, Rudolf Clausius, Rutherford B. Hayes, Étienne Lenoir, Charles Hermite, and Edmond de Goncourt. Among people deceased in 1890, César Franck ranks 5. Before him are Vincent van Gogh, Heinrich Schliemann, Sitting Bull, and Carlo Collodi. After him are William III of the Netherlands, Gyula Andrássy, Amadeo I of Spain, Joseph Merrick, Henri Nestlé, Duchess Helene in Bavaria, and Richard Francis Burton.

Among COMPOSERS In Belgium