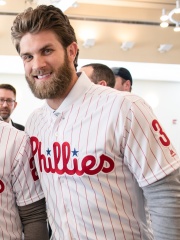 Bryce Aron Max Harper (born October 16, 1992) is an American professional baseball right fielder for the Philadelphia Phillies of Major League Baseball (MLB). He played in MLB for the Washington Nationals from 2012 through 2018. He has been touted as a "five-tool player".Harper graduated from high school early so that he could attend the College of Southern Nevada, where he won the 2010 Golden Spikes Award. Read more on Wikipedia

Among baseball players, Bryce Harper ranks 71 out of 70. Before him are Ryan Howard, Josh Hamilton, Dustin Pedroia, Prince Fielder, Evan Longoria, and Joey Votto. After him are Buster Posey, Paul Goldschmidt, and David Wright.