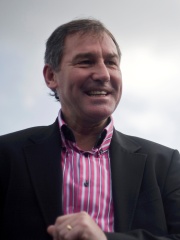 Bryan Robson OBE (born 11 January 1957) is an English football manager and former player. Born in Chester-le-Street, County Durham, he began his career with West Bromwich Albion in 1972 before moving to Manchester United in 1981, where he became the longest-serving captain in the club's history and won two Premier League winners' medals, three FA Cups, two FA Charity Shields and a European Cup Winners' Cup. In August 2011, Robson was voted as the greatest ever Manchester United player in a poll of the club's former players as part of a book, 19, released to celebrate the club's record-breaking 19th league title.Robson represented England on 90 occasions between 1980 and 1991, making him at the time the fifth-most capped England player. Read more on Wikipedia

Since 2007, the English Wikipedia page of Bryan Robson has received more than 1,272,763 page views. His biography is available in 35 different languages on Wikipedia making him the 1,862nd most popular soccer player.