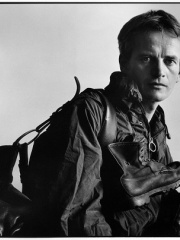 Charles Bruce Chatwin (13 May 1940 – 18 January 1989) was an English travel writer, novelist and journalist. His first book, In Patagonia (1977), established Chatwin as a travel writer, although he considered himself instead a storyteller, interested in bringing to light unusual tales. He won the James Tait Black Memorial Prize for his novel On the Black Hill (1982), while his novel Utz (1988) was shortlisted for the Man Booker Prize. Read more on Wikipedia

Bruce Chatwin is most famous for his book, In Patagonia. The book is a travelogue of Chatwin's travels in Patagonia, a region of South America.

Among writers, Bruce Chatwin ranks 875 out of 5,794. Before him are Else Lasker-Schüler, Richard Matheson, Kobayashi Issa, Nestor the Chronicler, Tukaram, and Władysław Reymont. After him are Luqman, V. S. Naipaul, Venantius Fortunatus, Anna Seghers, Laura de Noves, and Tannhäuser.