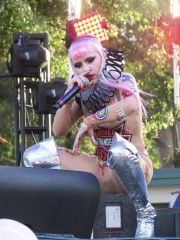 Brooke Dyan Candy (born July 20, 1989) is an American rapper, singer and songwriter. Raised in the suburbs of Los Angeles, daughter of Tom Candy, former CFO of Hustler Magazine, Brooke rose to prominence after starring in Grimes' music video for "Genesis" (2012), which went viral. Following its success, Candy's status in the underground scene rose as she began to release her own material: "Das Me" (2012), "Everybody Does" (2013), and "I Wanna Fuck Right Now" (2013). Read more on Wikipedia

Among singers, Brooke Candy ranks 3,480 out of 3,541. Before her are Carly Patterson, Amber Bondin, Martin Vučić, Mike Will Made It, Cassadee Pope, and DJ Drama. After her are Asher Roth, Nika Turković, Nikki Yanofsky, Daz Sampson, Vladimir Arzumanyan, and Clare Maguire.