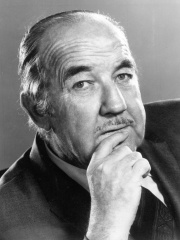 William Broderick Crawford (December 9, 1911 – April 26, 1986) was an American stage, film, radio, and television actor, often cast in tough-guy roles and best known for his Oscar- and Golden Globe-winning portrayal of Willie Stark in All the King's Men (1949) and for his starring role as Dan Mathews in the television series Highway Patrol (1955–1959).Until filming All the King's Men, Crawford's career had been largely limited to "B films" in supporting or character roles. He realized he did not fit the role of a handsome leading man, once describing himself as looking like a "retired pugilist". Read more on Wikipedia

Since 2007, the English Wikipedia page of Broderick Crawford has received more than 1,057,888 page views. His biography is available in 46 different languages on Wikipedia making him the 2,642nd most popular actor.