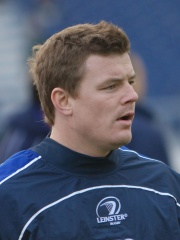 Brian Gerard O'Driscoll (born 21 January 1979) is an Irish former professional rugby union player. He played at outside centre for the Irish provincial team Leinster and for Ireland. He captained Ireland from 2003 until 2012, and captained the British & Irish Lions for their 2005 tour of New Zealand. Read more on Wikipedia

Among rugby players, Brian O'Driscoll ranks 12 out of 13. Before him are Sergio Parisse, Richie McCaw, Sonny Bill Williams, Percy Montgomery, Bryan Habana, and Shane Williams. After him are Jonathan Sexton.

Among RUGBY PLAYERS In Ireland

Among rugby players born in Ireland, Brian O'Driscoll ranks 1. After him are Jonathan Sexton (1985).