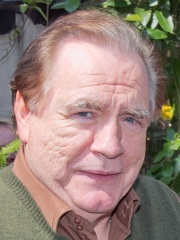 Brian Denis Cox (born 1 June 1946) is a Scottish actor. He has worked extensively with the Royal Shakespeare Company and the Royal National Theatre, where he gained recognition for his portrayal of King Lear. He played supporting roles in Rob Roy (1995) and Mel Gibson's Academy Award-winning Braveheart (1995). Read more on Wikipedia

Brian Cox is a British physicist, professor, and television presenter. He is most famous for his work on the BBC series Wonders of the Solar System and Wonders of the Universe.

The A.V. Club
From Lear's crown to Ahab's leg, Brian Cox has some great stories of stage disasters
Introduced by Stephen Colbert as Succession’s “patriarch we love to hate,” Brian Cox proved actually pretty lovable as he regaled his host with stories of his own father and mother. Speaking of his recent, bracingly honest autobiography Putting The Rabbit In …
Dennis Perkins
Adafruit.com
Astrophysicist Brian Cox on the Science Behind “Don’t Look Up”
Last week I posted a video of astrophysicist Dr. Becky responding to the space science in the controversial film, Don’t Look Up.Here is another astrophysicist, Brian Cox, giving his assessment of the film’s science. Although there is obvious overlap between t…
gareth branwyn
The Cut
Let This Brian Cox Quote Be Your Guide
The Succession star is “too old, too tired, and too talented,” and, honestly, same.
Olivia Truffaut-Wong
Eonline.com
Brian Cox Says Succession Co-Star Jeremy Strong Was Warned Not to Do New Yorker Profile
Kendall Roy does what he wants, sometimes to his own detriment. The actor who plays him may do the same. After the now-infamous December New Yorker profile on Jeremy Strong--which...
Ashley Joy Parker