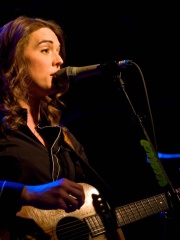 Brandi Marie Carlile /ˈbrændi ˈmæri ˈkɑːrlaɪl/ (born June 1, 1981) is an American singer-songwriter and producer whose music spans many genres. As of 2021, Carlile has released seven studio albums and earned 18 Grammy Award nominations, including one for The Firewatcher's Daughter (2015), six for By the Way, I Forgive You (2018), three for her work as producer and songwriter on Tanya Tucker's album While I’m Livin’ (2019), and three for "Right on Time" from In These Silent Days (2021). She was the most nominated woman at the 61st Annual Grammy Awards, with six, including nominations for Album of the Year (By the Way, I Forgive You), Record of the Year and Song of the Year ("The Joke"). Read more on Wikipedia

Among singers, Brandi Carlile ranks 3,084 out of 3,541. Before her are Moran Mazor, Rebecca Black, Hind Laroussi, Kasia Moś, Will Young, and Stefanie Heinzmann. After her are Leonora, David Civera, Kurt Vile, Stephanie, Jaci Velasquez, and Ace Wilder.