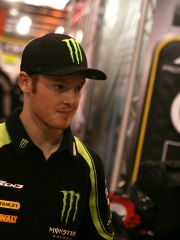 Bradley Smith (born 28 November 1990) is a British motorcycle racer, contracted to Aprilia Racing Team Gresini as a development/test/replacement rider in the MotoGP class of the World Championship. He won the Suzuka 8 Hours in 2015, with Yamaha teammates Katsuyuki Nakasuga and Pol Espargaró. Smith is the only rider to have taken a podium in all four classes of Grand Prix motorcycle racing, with top-three finishes in the pre-Moto3 125cc class, Moto2 class, MotoGP class and MotoE World Cup. Smith had a long association with the French Tech3 team, riding for six seasons, two in Moto2 class and four in MotoGP using factory-supported Yamaha YZR-M1 machines. Read more on Wikipedia