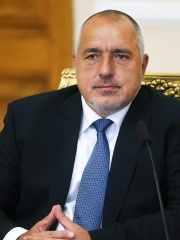 Boyko Metodiev Borisov (Bulgarian: Бойко Методиев Борисов, IPA: [ˈbɔjko mɛˈtɔdiɛf boˈrisof]; born 13 June 1959) is a Bulgarian politician who served as the prime minister of Bulgaria from 2009 to 2013, 2014 to 2017, and 2017 to 2021, making him Bulgaria's second-longest serving prime minister to date. Borisov was elected Mayor of Sofia in 2004. In December 2005, he was the founding chairman of the conservative political party Citizens for European Development of Bulgaria (GERB), becoming its lead candidate in the 2009 general election. Read more on Wikipedia

Among politicians, Boyko Borisov ranks 4,896 out of 15,710. Before him are Emil Maurice, Theobald II, Count of Champagne, Nzinga of Ndongo and Matamba, Henry III, Margrave of Meissen, Jean-Pierre Boyer, and Kyriakos Mitsotakis. After him are Stanislav Kosior, Juan Prim, 1st Count of Reus, Mikheil Saakashvili, Altiero Spinelli, Countess Palatine Maria Franziska of Sulzbach, and Æthelred of Mercia.