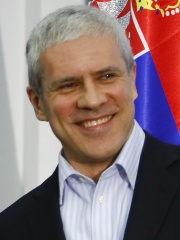 Boris Tadić (Serbian Cyrillic: Борис Тадић, pronounced [bǒris tǎdiːt͡ɕ]; born 15 January 1958) is a Serbian politician who served as President of Serbia from 2004 to 2012. He was elected to his first term on 27 June 2004, when Serbia was part of Serbia and Montenegro, and re-elected for a second term on 3 February 2008, this time as president of independent Serbia. He resigned on 5 April 2012 in order to trigger an early election. Read more on Wikipedia

Boris Tadić is most famous for being the President of Serbia from 2004 to 2012.

Among politicians, Boris Tadić ranks 3,607 out of 15,710. Before him are Emperor Xianzong of Tang, Lycurgus of Athens, Abdur Rahman Khan, Tissaphernes, Emilio Mola, and Kavad II. After him are Redbad, King of the Frisians, Robert I, Count of Artois, John Hyrcanus, Friedrich Wilhelm, Duke of Schleswig-Holstein-Sonderburg-Glücksburg, Zumbi, and Victorinus.