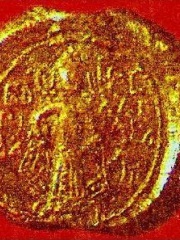 Boril (Bulgarian: Борил) was the emperor (tsar) of Bulgaria from 1207 to 1218. He was the son of an unnamed sister of his predecessor, Kaloyan and Kaloyan's brothers, Peter II and Ivan Asen I, who had restored the independent Bulgarian state. After Kaloyan died unexpectedly in October 1207, Boril married his widow, a Cuman princess and seized the throne. Read more on Wikipedia

Since 2007, the English Wikipedia page of Boril of Bulgaria has received more than 38,541 page views. His biography is available in 27 different languages on Wikipedia making him the 7,724th most popular politician.

Page views of Boril of Bulgarias by language

Among politicians, Boril of Bulgaria ranks 7,681 out of 14,801. Before him are Henry of Speyer, Catherine I, Latin Empress, Duke Philipp of Württemberg, Eugen Ehrlich, Shibi Khan, and Lucius Cornelius Scipio. After him are Hethum II, King of Armenia, Pietro I Candiano, Azzone Visconti, Khalid bin Barghash of Zanzibar, Francisco de Paula Rodrigues Alves, and Korbinian Brodmann.

Among people born in 1110, Boril of Bulgaria ranks 15. Before him are Robert de Boron, Bertha of Sulzbach, John Tzetzes, Abraham ibn Daud, Odo de St Amand, and Düsum Khyenpa, 1st Karmapa Lama. After him are Aelred of Rievaulx, Rostislav I of Kiev, Alice of Antioch, Antipope Paschal III, and Diarmait Mac Murchada.