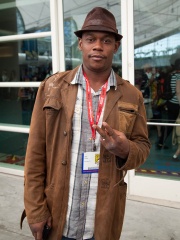 Bokeem Woodbine (born April 13, 1973) is an American actor. He won a Black Reel Award and was nominated for a Primetime Emmy Award and a Critics' Choice Television Award for his role as Mike Milligan on the second season of Fargo. Read more on Wikipedia

Since 2007, the English Wikipedia page of Bokeem Woodbine has received more than 2,533,872 page views. His biography is available in 18 different languages on Wikipedia making him the 7,032nd most popular actor.