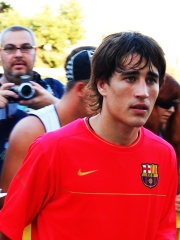 Bojan Krkić Pérez (Spanish pronunciation: [ˈboʝaŋ ˈkiɾkitʃ ˈpeɾeθ]; Serbian Cyrillic: Бојан Кркић Перез, pronounced [bǒjan kr̩̂kitɕ pěrez]; born 28 August 1990), also known as simply Bojan, is a Spanish footballer who plays as a forward for Montreal Impact in MLS. Bojan began his career at Barcelona after progressing through the youth ranks at La Masia. His early promise saw him make his first-team debut at the age of 17 years and 19 days, breaking the record set by Lionel Messi. In his debut season, he scored 12 goals in 48 matches. Read more on Wikipedia

Since 2007, the English Wikipedia page of Bojan Krkić has received more than 2,166,731 page views. His biography is available in 53 different languages on Wikipedia making him the 1,240th most popular soccer player.