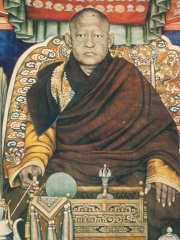 Bogd Khan (Mongolian: Богд хаан, ᠪᠣᠭᠳᠠ ᠬᠠᠭᠠᠨ; Chinese: 博克多汗; c. 1869 – 20 May 1924) was the ruler (khan) of the Bogd Khaganate of Mongolia from 1911 to 1924, following the country's independence from the Qing dynasty of China after the Xinhai Revolution. Born in Tibet, he was the third most important person in the Tibetan Buddhist hierarchy as the 8th Jebtsundamba Khutuktu, below only the Dalai Lama and Panchen Lama, and therefore also known as the "Bogdo Lama". He was the spiritual leader of Outer Mongolia's Tibetan Buddhism. Read more on Wikipedia

Among politicians, Bogd Khan ranks 4,269 out of 15,710. Before him are Jindeok of Silla, Zhu Youlang, Takelot II, Andocides, Sisowath Monivong, and Bolesław II the Generous. After him are Yang You, Terauchi Masatake, Tokugawa Yoshimune, Andrej Hlinka, Deokjong of Goryeo, and Charles of Valois, Duke of Berry.